I really like documents, software, design, and the technology that ties it all together. This is the year I finally take learning about the web seriously.

Summer is coming, and I’ve embarked on a research project concerning documents from the U.S. District Courts. As I was consolidating my work this morning, I grew frustrated with the naming conventions (or lack thereof) I’d been using while saving PDFs to drive. And since I have been rather, er, interested in filenames recently, it seemed as good a time as any to collect my thoughts. I will begin with the caveat that while I am a librarian and professor of legal research, and a successful applicant to the N.C. bar, I have never worked on a case as an attorney, so I am hoping to solicit some feedback in the comments below. I plan to keep this post updated with new information as it becomes available. So, let’s begin!

The first federal district court document I found was a complaint from the Middle District of North Carolina, filed in 2016 and assigned the docket number 1:16-cv-00988. Here are two examples of how I would name this file:

Because the 94 federal district courts all use the same docket numbering pattern, it is essential to start the file name with an abbreviation for the court. I chose the abbreviation that the U.S. Courts uses for its websites — i.e., http://www.ncmd.uscourts.gov/ — which I like because it should always make it easy to sort by state alphabetically. Then, an underscore, followed by the docket number divided all by single dashes at the appropriate points. (Incidentally, this piece of the citation is considered “valid” by Bloomberg Law’s docket search feature, which is an added bonus.) Finally, the docket number, which should always be four characters, and prepended with as many leading zeros as is necessary to achieve this. If it’s important for you to be able to tell, at a glance, what the document is — i.e., an order, a memorandum in support of a motion, etc., etc., you should develop some kind of vocabulary for naming the document and add that after the docket number.

This naming scheme will allow you to easily parse your filenames and get them into a structured data format like a .csv file or Excel spreadsheet, if you’re going to be doing any analysis; greater structure will also help if you use a citation management system while writing. Of course, you can simply sort your directories by filename alphabetically and likely get a good picture of what you’ve got.

For cases in the federal district courts, I’d also recommend creating directories for each case or matter that is being studied, but only if that case is particularly significant to your research or you have collected a lot of documents related to the case. I’d recommend using party names and eschewing the lowercase directory naming convention. For the document I’ve been using as an example, the directory would be Calloway-v-Moore and you would place documents from subsequent appeals or docketings, and presumably would also be useful if the case had been removed from state to federal court or if it had been transferred.

My solution for documents from Article I U.S. Bankruptcy Courts follows the exact structure as above, using the url abbreviation from the federal court system website. A case from the United States Bankruptcy Court for the Eastern District of North Carolina would begin with NCEB. I will try to compile a simple chart of all the abbreviations used in federal court urls.

There are thirteen courts that make up the circuit courts of the U.S. Court of Appeals. Eleven are numbered geographic circuits, which leaves the DC Circuit and the Federal Circuit. I find it considerably easier to name files from these courts, however, there is a wrinkle concerning the case citation. Here are two examples of opinions I have collected:

The first component is rather self-explanatory — a two digit designation for the numerical circuit followed by CA. For the DC Circuit, I recommend DCCA and for the Federal Circuit, FCCA because, well, I am allowed to be arbitrary and there doesn’t seem to be a likelihood that either abbreviation will conflict with other abbreviations used in the legal field. Also, each is four characters — consistency! [Though Rachel Gurvich, a colleague and legal writing professor at UNC, pointed out that she uses CTAF, which is the four-character abbreviation used by Westlaw for Federal Circuit cases. Just pick one and stick with it!]

Next, we have a four-digit year notation for the date the opinion was filed. Following that is the case number or case citation, which will depend on what is available and perhaps on your own intellectual bent. Opinions from the U.S. Court of Appeals are published in West Publishing Federal Reporter, but, more recently, have been published directly by the court on its website or collocated and served from a site like govinfo.gov. If you have a document from the Federal Reporter (now in its third series, so F, F2d, and F3d will be appropriate abbreviations), I recommend following the Volume-Reporter-FirstPage model of citation. If you have any other federal appellate opinion, I recommend using the case number followed by an underscore and the case name format discussed above. Of course, appending the case name might be helpful in the case of an opinion in the Federal Reporter.

Again, the idea here is not to make your filename look like a Bluebook citation, it is to make it easier for you to draw meaningful information from the filename alone and to facilitate parsing of the data you’ve collected for any number of important purposes.

Naming a case from the U.S. Supreme Court is rather straightforward — US followed by the four-digit year of decision, the case number, and some kind of descriptive phase about the case. These two names, representing recent cases in my collection, serve as examples: US_2014_13–354_Burwell-v-HobbyLobby.pdf and US_2016_15-108_PR-Sovereignty.pdf

There is more on this to come in a subsequent post, but in the meantime, check out some data that was pretty easily parsed out from the information provided by the N.C. Administrative Office of the Courts concerning N.C. Court of Appeals opinions.

I will only discuss naming files from state appellate courts here, and will use North Carolina as an example. For state trial court documents, I’m afraid we will need another extremely long and boring blog post.

Here is an example of a filename for a document from a state appellate court:

This case, from the North Carolina Court of Appeals, was interesting to me because it involved a quantum meruit claim for an attorney’s services. It’s the only 2017 case in my collection about an attorney fee dispute, and the party names weren’t significant to me, so I used a descriptive phrase. Pretty straightforward. If your state has multiple intermediate appellate courts, I recommend coming up with a two-character abbreviation. Please leave it in the comments below! For those of you regularly practicing in the nine states lacking intermediate appellate courts, I have just wasted a minute of your time.

I recommend using SC as the abbreviation for North Carolina’s Supreme Court, rendering a file name as such: NC_SC_1980_299-NC-360_Ragland-v-Moore.pdf

Here, we have an opinion from 1980 — but, because of the nature of the publication of state court opinions, we have a complication. Most states have both an official reporter for decisions and have decisions published in West’s National Reporter System. I suggest that, when possible, you use either the case number or the official reporter to use in your filename. The reason is that both citations are more rich in data at a glance than the regional reporter citation. There’s a lot to say about medium-neutral citation here, but my purpose isn’t to give a lesson in that whole mess, but rather to suggest an efficient and useful method of naming files so you can find them easily and analyze what you have.

A Note About Case Management Systems

Professor Gurvich also suggested, rightly, that a given firm or organization’s case management system will add information, likely a client ID and/or a matter number, to most documents. One thing that is great about case management systems is that they obscure the small details of document metadata and make things easier or more intuitive to find. In many ways, this is the point of software and information design — to make the user’s experience more fluid (and to prevent inconsistencies in data entry) so she need not worry about, say, following a complex system of filing naming perfectly.

The file-naming system described above is suggested for those without access to such a system, or those, like scholars, who use court documents in a way different from lawyers or judges. I’d suggest having a directory or file for each client, and a sub-directory for each matter, and then place named files inside, to roughly recreate the strength of a good automated document management system.

That said, I still think there is plenty of value in organizing one’s files according to a consistent scheme. This one is built with the idea of being both human and machine readable — that is, providing information to a user both at a glance and after some kind of software manipulation. Likewise, file names are indexed by all modern operating systems, meaning that using your computer’s search function will be faster, especially if you append descriptive phrases, such as party or document names, at the end of your file name.

And here, for your viewing pleasure, is a list of files of case documents: 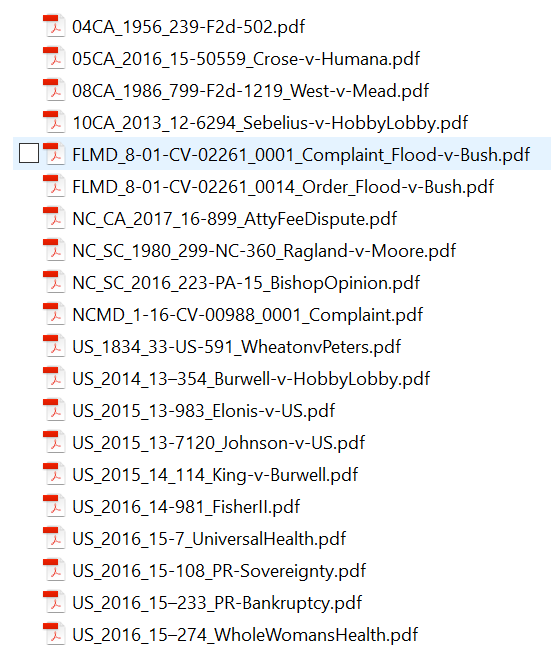